Entergy and the Dams of Hot Springs - Lake Hamilton

Entergy and the Dams of Hot Springs

Lake Catherine is a small 1,940-acre lake nestled in the Ouachita Mountains. It is one of the five popular Diamond Lakes located in West-Central Arkansas near the city of Hot Springs. It was created in 1924 with the construction of the Remmel Dam on the Ouachita River.

The Remmel Dam was constructed by Arkansas Power & Light (AP&L), now known as Entergy, to provide more power to the state in anticipation of the growing demand for electricity after World War I. Flavius Josephus Carpenter, a riverboat captain, met with the founder of AP&L Harvey Couch to discuss the possibility of building dams on the Ouachita River for hydroelectric power.

Remmel Dam was constructed by the Ambursen Construction Co. using reinforced concrete slabs supported at a 45° angle to the riverbed by reinforced concrete buttresses and is a modified Ambursen type. The dam is approximately 900 feet long and 60 feet tall. Its three Francis-type turbines could generate up to an estimated 9.3 Megawatts of power.

With the construction of the Remmel Dam, Lake Catherine was created. On the shores of the lake was the Lake Catherine State Park, which was developed by the Civilian Conservation Corps in 1937 and was one of the six original state parks in Arkansas. The park opened in the same year after roads were constructed and were used as a rest and recreation facility satellite facility for wounded servicemen in the Hot Springs Army and Navy Hospital from 1942 to 1945.

The park offers a wide variety of recreational activities, which include trails for hiking, open grounds for camping, and wide areas for fishing, boating, and horseback riding. Guided hikes and horseback trail rides, lake tours, and nature programs are also offered especially in the summer.

Following the completion of the Remmel Dam in 1924, a second site 10 miles upstream from Remmel Dam was selected for the second dam near Hot Springs, Arkansas to provide more hydroelectric power for the state of Arkansas. This would later come to be called the Carpenter Dam, named after Flavius Josephus Carpenter, the associate of then AP&L President Harvey Couch, who selected the site of the dam.

Construction on the dam began in February 1929 by the engineering firm Ford, Bacon, and Davis. It included the evacuation of the reservoir and the construction of a railroad that would connect to the Missouri Pacific line for easy material transport. More than 156,000 cubic yards of concrete were used to construct the 115 feet-high and 1,165 feet-long dam. Construction was completed in December 1931. Its two generators produced an output of about 56 Megawatts and provided electricity to the AP&L system during peak hours. It is also credited with helping AP&L, and on a bigger scale Arkansas, survive the Great Depression as its full impact was felt by Arkansas during construction of the dam. It was listed on the National Register of Historic Places on September 4, 1992.

Upon completion of the Carpenter Dam, Lake Hamilton was created. It was named after Colter Hamilton Moses, the general counsel for all of Couch’s business enterprises. Its 7,200-acre area has been a boon for the local economy of Hot Springs. Much of the lake is surrounded by resorts, restaurants, hotels, condominiums, and tourist enterprises, all developed to take advantage of the lake’s picturesque view.Virginia Kelley, the mother of former U.S. president Bill Clinton, notably resided lakeshore in Lake Hamilton with her fourth husband.

Many different attractions can be found at Lake Hamilton. This includes Garvan Woodland Gardens, a 210-acre botanical park accessible by boat and Hill Wheatley Park, home to the best swim beach on the lake. Managed by the Arkansas Game and Fish Commission (AGFC), the Andrew H. Husley State Fish Hatchery has devoted its operations to the breeding of different varieties of bass and other species on the south shore of the lake. Lake cruises are also offered by the Belle of the Springs, a 400-passenger riverboat. 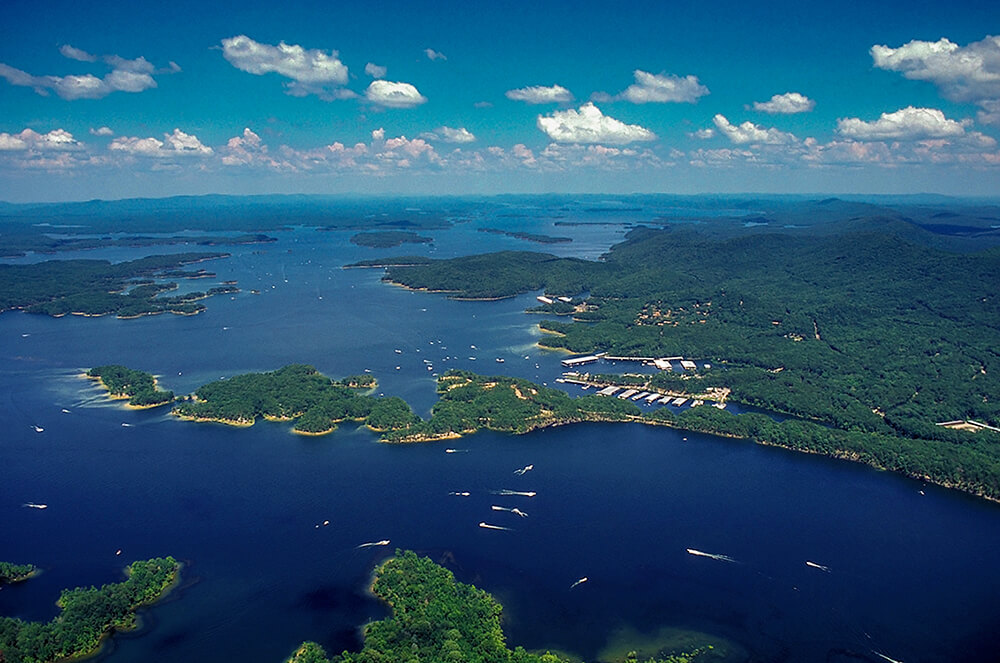 Plans for a third, larger hydroelectric dam along the Ouachita River were announced in 1938 for the Blakely Mountain area following the completion of both Remmel and Carpenter Dams several years prior. It was to be a joint project between AP&L and the U.S. federal government. However, after seeking permission to delay the project the following year, the federal government canceled AP&L’s construction permit and proceeded with the construction on its own. However, it wasn’t until 1946 that the construction of the dam would begin after Congress finally appropriated funds.

Construction began in 1948 and completed in 1953 and the dam became fully operational by October 1955. It was 231 feet tall and is 1,100 feet long. Its turbines were able to supply as much as 75 Megawatts. Its completion also created the largest lake completely located in Arkansas, Lake Ouachita with over 40,000 acres of area. The larger Bull Shoals Lake extends into Missouri.

Lake Ouachita was opened to the public in 1955 after the U.S. Corps of Engineers approached the state about establishing a state park to preserve the “Three Sisters” springs naturally found in the area.

Lake Ouachita is home to several species of fish, as well as varieties of bass. These include the largemouth bass, smallmouth bass, spotted bass, bream, crapple, catfish, walleye, and the striped bass. With a large population of striped bass, Lake Ouachita has been known to be the Striped Bass capital of the world. It has attracted professional and amateur anglers alike to fish in its world-class waters.

Lake Ouachita State Park was created on paper in 1955, but was finally established and staffed in 1965. Several of the parks original facilities still remain to this day and was renovated and restored. Its present facilities include a new visitors center, restaurant, cabin, and multiple campsites.

Several outdoor activities can be enjoyed in Lake Ouachita. Park officials installed a marina and boat ramps so the beauty of the lake can be enjoyed while boating. There are also several swimming areas around the lake. Hiking trails were made for the outdoor enthusiasts. Interpretive exhibits are available at the heart of the park for a more educational tour of the park. Eagle tours are also available when birds fly to the area during winter.

View all posts by lakehamilton news →

Take a trip down memory lane to the time when we ate funnel cakes, corn dogs, and cotton candy and rode the Fe